A Big Difference between Web Development and Web Designing 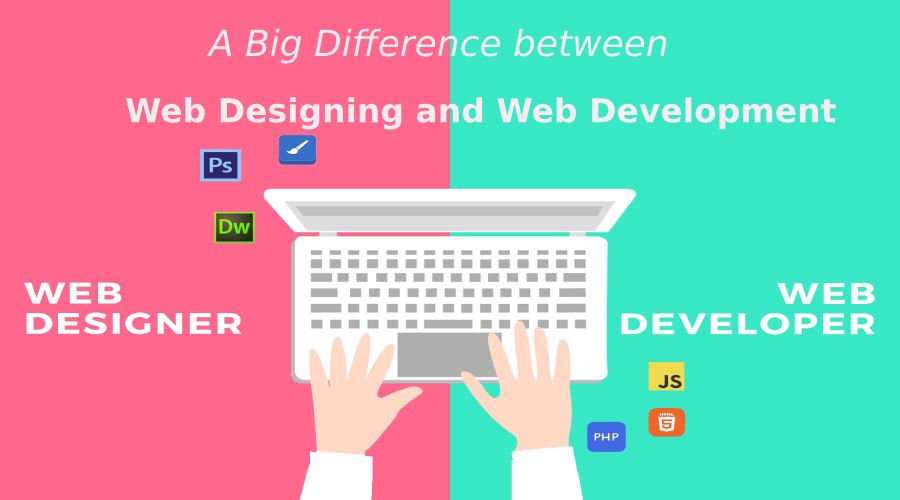 If the website giving the best user experience it means its designing and developing service is excellent. For instance, we can take the example of a car to explain more about the difference between both factors of the website. A car made with the help of designer and developer also. Hence the outer look of the car, seats, comfort, and style is designed by the designer. While the engine, wheel, and transmission of the car being developed by the developer.

Who is Web Developer?

Who is Web Designer?

When an architect creates the layout of the home. Before the engineer starts developing the idea for the building strong. Hence the web designers perform the task for creating the designs of the website with the help of their incorporating vibrant ideas or the stories into a design.  For the reason that is visually appealing and providing you the best web designing services. They are dubbed as UX Designer or User Experience Designers.

Hence there are many tools which are used by web developers.  The services which are used by web developers to web design are highly skilled in Front-end technology utilization like HTML, CSS, JavaScript.  Therefore they also use a framework like Ember, React JS and Angular JS with the libraries like jQuery and Bootstrap. For the reason that web developers are the master of any one or more IDE tools. Even more, for instance, WebStorm, VS Code and Sublime and use management tools for source code such as CVS, SVN and GitHub.

For the reason many of the providing custom web design services that are efficient of using a logo, graphics, and image design software like Adobe Photoshop, Inkscape, GIMP, Adobe Illustrator, etc.

They also incorporate Typography, Color Palette, Storyboards, Mockups, Branding, Wireframes and Call-to-action buttons for the layout. They use prototyping tools like Mock plus and UXPin. Balanced light and dark color contrast, highlighting certain information tabs, creating a consistent and clean rhythm and uniting specific categories are what their skill is.

The difference in Job Profile

We all know that User Experience designers create low fidelity wireframes and they are having high fidelity prototypes along with defining information architecture, persona and scenarios. The designers who are user interface designers. They create corresponding interfaces with the logos, templates, layouts, buttons, illustrations and other elements. For the purpose of front end development.

When we talk about the developer, for the front end development. The developer creates markup, scrolling, pagination, drop down menu and animation, font families and implement typography with a scripting language.

This development ensures you to interact with the web resource. For the Back-end Development, on the other hand, developer requests control and manages a database of the dynamic data so that they can be used or updated later.

The difference in Skill Level and Roles

The roles according to the skill level of a developer are –

Hence both designer and developer share a symbiotic relationship where both depend on the other to make the website run efficiently to make it Best web development services. With growing demand, it is also evident that many hybrid designer-developers are making the best out of this business.