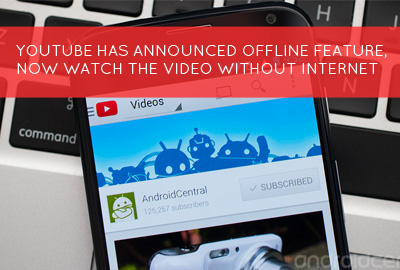 Recently YouTube has announced its new feature of offline video in India. With the help of this feature now you can see these videos offline without using internet. This offline feature of YouTube is launched with android one Smartphone of Google. This feature would be supportable by android and IOS. You tube has told that now a lot of popular content of YouTube you can see offline.

This feature of YouTube will be using only with the app. However, to see the video offline you will have to connect the video with WI-FI and data and have to download. Then after 48 hours of downloading you can see the video.

This features is so much beneficial for them who lives on such places where only just for hours they get WI-FI or high speed net connectivity. In this order you can download your video. Those peoples who are troubled with the buffering problem can download his whole video and can watch the video easily via offline.